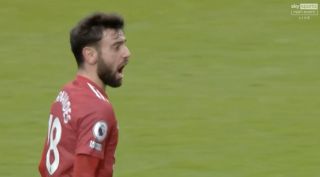 Manchester United have managed to claw themselves back level after a hugely underwhelming first-half against West Brom saw the Red Devils fall behind after just 90-seconds.

Despite the poor opening, Ole Gunnar Solskjaer’s half-time team-talk has been made a little easier after midfield sensation Bruno Fernandes popped up to net a brilliant equaliser just minutes before the game’s break.

However, a passage of play just before the interval had the potential to see the Red Devils take the lead.

After a poorly placed pass from West Brom was cut-out expertly by attacker Anthony Martial, United looked to be in a four-on-one situation.

However, shockingly, referee Craig Pawson decided he would blow for half-time while the Red Devils were piling forward.

Read more: Opinion: Don’t get Amad, get even