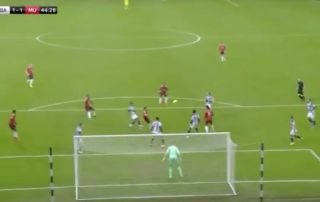 A really bad time for West Brom to concede but we’re not going to worry about that. It’s about Manchester United getting back into the game and taking all three points from their trip to The Hawthorns.

Bruno Fernandes hasn’t played particularly well against West Brom in the first-half but it was his goal that brought the two teams level shortly before the interval.

Luke Shaw has been getting a lot more assists lately and here he is again, crossing in a perfect ball to be volleyed home by the Portuguese international.

Fernandes controlled the ball wonderfully before hitting the back of the net.

It's a superb finish from the midfielder, hooking Shaw's cross past Johnstone on the stroke of half-time.

He and many others need to perform better in the second-half if United are win today. West Brom know we are weak at the back and are trying to force our defenders into mistakes, as seen at the beginning when Victor Lindelof was at fault for the opener.