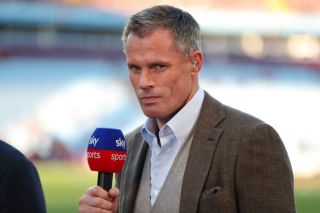 The former Liverpool defender is known for having supported Everton when he was a kid – but it was the red side of Mersey Carragher represented throughout his professional career.

It may be Valentines but there’s no love lost between United and Liverpool. Mitten took a shot at Liverpool to the tone of the famous ‘Roses are red, violets are blue’ poem before Carragher added his own spin.

Check out Mitten’s hilarious reply to Carragher below:

Liverpool wear red, Everton wear blue; why support one team when you can support two! (+ Marine).

It didn’t end there. Former Norway international turned source for Bundesliga transfer news Jan Aage Fjortoft joined in by poking fun at Carragher for not winning the Premier League.

Roses are red, violets are blue;
You had a much better career than me, but Premier League-titles I have as many as you https://t.co/UzzPAz5hKJ

Liverpool’s season went from bad to worse yesterday when they were well beaten by Leicester City.

Jurgen Klopp conceded the title afterwards and it doesn’t look like it will be getting better any time soon for the reigning champions. A horrible defence of the Premier League is what ‘the greatest ever Premier League winners’ (some will have you believe) will be remembered for.