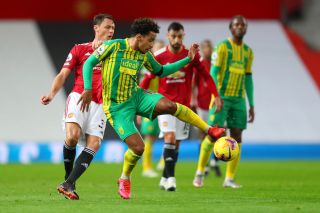 Ole Gunnar Solskjaer and his Red Devils are currently preparing to take-on Sam Allardyce’s West Brom at The Hawthorns.

United come into Sunday afternoon’s match, which kicks-off at 2pm (UK time), in decent form having failed to be beaten in their last four matches, in all competitions.

Elsewhere, the Baggies will be desperate to try and close the gap on the dramatically expanding relegation zone.

At risk of being cut adrift, West Brom will praying they can cause one of the upsets of the season as they look to capitalise on their game in-hand over 17th-place Fulham.

Here’s how Ole’s Reds will line up for #WBAMUN…

Ahead of Sunday’s important game at either end of the table, we have looked at three areas the match can be won and lost.

United’s experienced left-back is in brilliant form and is without a doubt one of the first names on Solskjaer’s team-sheets.

Looking at each side’s confirmed line-up, I would like to think Shaw can continue his form and spend most this game in his opponent’s half.

With the Baggies’ best player being Matheus Pereira who is situated on the opposite flank, it goes without saying, full-back partner Aaron Wan-Bissaka is less likely to maraud forward.

Therefore, in order to maintain a healthy balance in the team, Shaw should be looking to get at West Brom’s right flank, which includes right-back Lee Peltier and 33-year-old midfielder Snodgrass, as much as possible.

As briefly mentioned above.

There is no question as to where West Brom’s biggest threat comes from and who their most creative player is.

Whilst I recognise it’s naive to expect one player to win a game on their own, Pereira will undoubtedly offer the most.

In order to further reduce their chances, Wan-Bissaka will need to lean on all his defensive qualities as well as his awareness and positioning to ensure Pereira is not allowed space or time to operate.

West Brom have a monstrous centre-back paring in Semi Ajayi and Kyle Bartley, who both stand at over six foot, three inches tall.

In order to get some joy with his usual movement inside his opposition’s box, Cavani will need to be at his absolute best.

Finding enough space to get the jump on either defender will be a tough ask, but if we’re to get any joy from balls into the box, Cavani will need to utilise all his positional experience – Something I actually expect him to do.