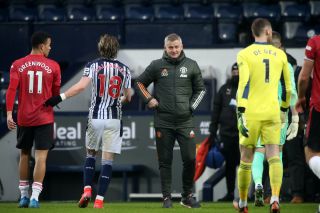 At times I think Ole Gunnar Solskjaer may be guilty of being too loyal to his players. You looked at Anthony Martial starting today and probably thought ‘what about Mason Greenwood? Our best front three is Rashy, Edi and Greenwood.’ I know I did.

I only ever try to offer constructive criticism and our form has nosedived. They definitely warrant criticism.

Fans don’t need to have a filter with the media, but I appreciate Solskjaer has and on top of that I don’t think anybody wants another Jose Mourinho episode.

We don’t sit inside the dressing room but I hope Solskjaer gave a different message to his players at full-time. Most notably Victor Lindelof, Anthony Martial and Marcus Rashford. I’m very tempted to add Bruno Fernandes to that list but he gets away with it this week for scoring United’s only goal.

Solskjaer was asked about United’s attitude going into games against teams in the lower half of the table. He dismissed claimed that there’s a problem by saying: “I cannot fault the attitude at all.”

OGS 💬 “The attitude is right. I’ve seen the focus, the work the coaches have done – the focus has been there, the attitude has been right. I cannot fault the attitude at all. It’s about the quality in games.” #WBAMUN pic.twitter.com/W88ls2zUex

Sadly, this wasn’t a one off.

Just over two weeks ago United had been on top of the Premier League table before a shock 2-1 defeat at home to bottom place Sheffield United hit us in the face. That wasn’t good enough — too complacent. The same again today.

So, there are definitely problems with the attitude of certain players in the camp. They didn’t want that win as much as they should. The proof is in the 90 minutes we just witnessed.

Another reality check but how many does is it going to take for these lads to play with a bit of consistency?

Winning the league was not our objective this season but winning the FA Cup and securing second place in the league should be. Nobody wants to see City run away with it.