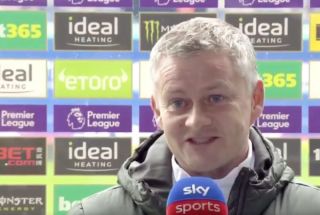 Although I’m not too sure I can say Manchester United deserved to win today, it definitely feels like two points dropped.

On paper there’s no competition and we hate to think before games that our players are going to think it will be a walk in the park.

They walked alright. For 44 minutes in the first half.

We were top of the table not too long ago but have dipped in form quite dramatically.

Ole Gunnar Solskjaer insists it was never the expectation to be in the title race, but even though the gap is increasing, he still wants to stop Man City winning the league.

“I said we shouldn’t be talked about [in the title race],” Solskjaer told Sky Sports after the match. “A compliment for the boys we got into the position we are now.

“We won’t let them [City] run away with it – we’re playing them soon. We’re not giving it away early – no we’re not.”

🗣"We need to keep on winning"

Ole Gunnar Solskjaer knows Manchester United have to be at their best today after Manchester City increased their lead at the top of the table pic.twitter.com/1vx88UPxUh

I feel that’s a better response than he gave a week ago, however, it doesn’t sound very encouraging after seeing the team struggling to break down West Brom.

Not a very happy Valentines this year.