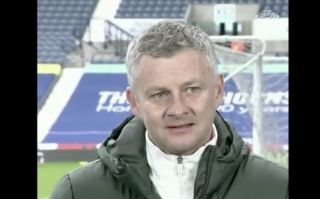 Manchester United manager Ole Gunnar Solskjaer has been speaking ahead of his side’s domestic clash against West Brom.

United come into Sunday’s away match in decent form after winning two and drawing two in their last four matches, in all competitions.

Looking to prevent arch-rivals Manchester City from running away with the league title, the Red Devils would have earmarked today’s game as one they should be taking all three-points from.

Ahead of the important match, Solskjaer has named a strong starting line-up which includes striking trio Marcus Rashford, Anthony Martial and Edinson Cavani.

Elsewhere, keeper David De Gea has reclaimed his number-one jersey and will be stationed behind a back-line of Aaron Wan-Bissaka, Victor Lindelof, Harry Maguire and the hugely in-form Luke Shaw.

The middle of the park will see a midfield double pivot of  Scott McTominay and Fred, who is also making his 100th United appearance, as well as number-10 Bruno Fernandes spearheading the trio.

Here’s how Ole’s Reds will line up for #WBAMUN…

Speaking ahead of the match, Solskjaer has explained his team selection and also took the time to praise an ageless Cavani who turned 34-years-old today.

No matchday would be complete without a pre-match word from the boss! 💬