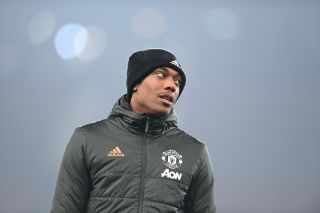 With a front three of Anthony Martial, Marcus Rashford and Edinson Cavani we should be expecting plenty of attacking football and goals.

Of course we could have a handbook of excuses at full-time too, but I like to be positive before kick-off.

David de Gea starts between the posts despite sections of social media thinking they know better than the United manager with their suggestions to give Dean Henderson the number one role.

In midfield Fred and McTominay will offer more defensive support for Bruno Fernandes, but I would also like to see less shooting from the Brazilian and our Scotland international rushing into the box more often.

Up front it will be down to Anthony Martial, Marcus Rashford and Edinson Cavani.

Here's how Ole's Reds will line up for #WBAMUN…

West Brom have been awful this season and really shouldn’t be able to match our firepower today, but the lads dropped their heads against Sheffield United not long ago and they cannot let that happen again.

De Gea keeps his place between the sticks, as expected. #MUFC