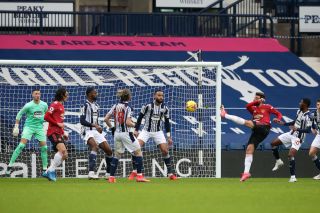 Could do little to keep out Diagne but denied his second. Superb double save to save Maguire from embarrassment. 7

Should have taken responsibility as Lindelof continued to lose battle with Diagne. Mauled by the West Brom striker in second-half and reprieved by De Gea. Excellent header late on denied by incredible save. 5

Weak as he was dominated by Diagne for West Brom’s opener. Bailly is Maguire’s best central defensive partner and that was reiterated this afternoon. 4

Not effective in initiating attacks and rarely made ambitious runs into box. Aggressive at times in defence and had shot blocked off the line. 5

Poor and cut a frustrated figure for 44 minutes before stunning goal. His impact was limited only to his left-footed volley. 6

Another game where he was ineffective and surely he will now be afforded a rest by Solskjaer. Needs to go back to basics and play the simple pass. 4

Anonymous for large periods and movement off the ball was poor. Only surprise was that he wasn’t substituted sooner. 3

Frustrated by a lack of chances in congested penalty area. His movement was good but not rewarded as he wasn’t helped by his fellow frontmen. 6

Decent effort was kept out by Johnstone. Should have come on earlier. 6

Not given enough time to influence play as West Brom arguably finished stronger. 5