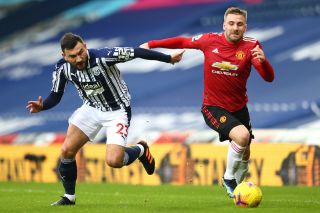 Ole Gunnar Solskjaer can take few, if any, positives from Manchester United’s draw against West Brom at the Hawthorns but Luke Shaw continued his great form in attack.

It’s the second time United have lost to a side in the relegation zone in three weeks after the shock defeat to Sheffield United at Old Trafford.

Few United players stood out at the Hawthorns but Luke Shaw is in the form of his life right now and United may have left with nothing without a precise cross from the left-back.

Shaw stood up a glorious cross that was volleyed home in some style by the otherwise ineffective Bruno Fernandes.

United’s left-back was perhaps guilty of being too narrow for Mbaye Diagne’s West Brom opener but he was solid in all areas after that aberration.

Surely Shaw will be high up in Gareth Southgate’s thoughts as he constructs his England squad for the European Championships this summer.

See Shaw’s stats from the West Brom draw below. Courtesy of Statman Dave.

In the form of his life. 👏 pic.twitter.com/B6VPjLcxF7