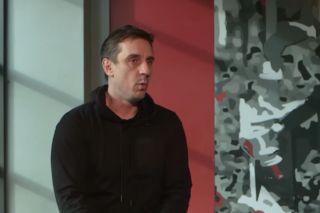 Gary Neville has surprisingly revealed who he felt would be a good partner for Harry Maguire at centre-back.

Many feel Eric Bailly would help bring the best out of Maguire but the Ivory Coast international suffers too many injuries and niggles to be considered a regular in the team.

And the feeling amongst many fans is that Victor Lindelof is not the right defender to partner Maguire, and both of them together could form one of the slowest races between two players in the Premier League.

There’s also a shout for Axel Tuanzebe but he has struggled with injuries too, so it’s highly probably that United will make defensive additions in the summer.

However, in an interview on Webby & O’Neill’s YouTube channel, Neville said: “I thought McTominay would be Maguire’s centre-back partner. He’s quick, aggressive, he gets up the pitch, can pass well as a defender, dominant. I don’t see much different between him and Stones, Rice, Dier, there’s a lot of similarities.”

The way in which McTominay has developed as a player has surprised many, and he keeps getting better and better, now adding goals to his game which isn’t common for central midfielders.

McTominay has appeared at centre-back for Scotland but was criticised after those performances.