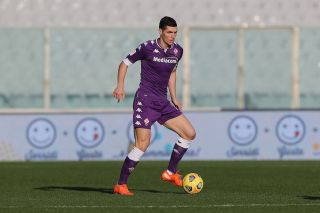 Iliev, who was instrumental in bringing both players to Partizan Belgrade before their switches to Fiorentina in 2018 and 2017 respectively, believes the pair have very bright futures.

Milenkovic, 23, has recently seen his name linked with a move to Ole Gunnar Solskjaer’s Red Devils.

Still at just 23-years-old, the talented Serbian is hotly tipped to become one of Europe’s most resolute defenders.

Elsewhere, team-mate Vlahovic, 21, who plays at the opposite end of the pitch, often as a lone-striker has also been catching headlines.

Although recently admitting he’s open to extending his contract in Florence (relayed by ViolaNews), the 21-year-old striker is also considered to be another talented prospect.

However, speaking in a recent interview with Labaro Viola (via Sports Witness), the pair’s old sporting director feels both players are set for big things.

“The two of them are big and will be bigger in the future,” Illiev said. “They have the ability to play in many top teams, even if Fiorentina are too.

“They could easily play in clubs like Manchester United, Juventus, Barcelona, ​​Real Madrid or Bayern Munich.

“I don’t know when the right time will be for them to leave. Vlahovic still needs some time, but Milenkovic is already ready for these teams.”