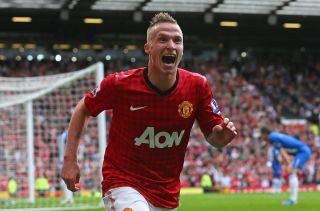 Sir Alex Ferguson once said Alexander Buttner was “one of the best young left-backs in Europe” but the Dutchman was never quite able to earn a place in the Manchester United team.

I watched him score and register an assist in the space of three minutes on his debut for the club against Wigan in 2012, after he signed as cover for Patrice Evra. The move came as a shock to United’s own scouts.

Ed van Stijn headed our recruitment department in the Netherlands and he was astounded because Buttner wasn’t close to being the best left-back in the Eredivisie.

“Every season [United] ask all European scouts for a list of players,” Van Stijn told Algemeen Dagblad (cited by GOAL). “They ask you to create a top five of the best players in the league for every position. I had Buttner at three or four on my list.”

It was a strange one but ultimately Ferguson was convinced by his new recruit. The Scot told reporters: “Alexander is one of the best young left-backs in Europe and we’re delighted to sign him. He’s someone we’ve been watching for a while now. He gives us some really exciting options in that position.”

Buttner never got a proper run in the team because he never looked good enough. Neither David Moyes or Louis van Gaal were convinced by him and it wasn’t long before he packed off to Dynamo Moscow. We shouldn’t forget that Butter was part of Ferguson’s final Premier League winning side in 2012-13. It’s just a shame he wasn’t able to kick on from that.

He still reflected on his time in England positively in an interview with De Telegraaf (cited by Sky Sports): “Who can say that he has been a champion in England? I can. Even Steven Gerrard did not succeed.

“I’ve become a much better football player, I played in the quarter-finals of the Champions League against Bayern Munich and Arjen Robben.

“I hear people talking on TV that I have only played a handful of games but I played a lot more games for Manchester United than I could ever have dreamed of.”

After Moscow he joined New England Revolution in the MLS. However, his contract was cancelled by mutual consent in January and now, having been released by Apollon Limassol, he finds himself in an uncertain situation for any footballer, and right in the middle of a global pandemic.

Alexander Buttner's contract with Apollon Limassol has been terminated before he has even played a game.

Media in Cyprus are reporting his physical condition worried the club.

With the media in Cyprus questioning Buttner’s physical condition, as something that worried Apollon Limassol, it makes me think if he needs to do some work on his own to reach the fitness required.

We’ll keep our eyes out for Buttner updates. Let’s hope he can get back playing football soon.