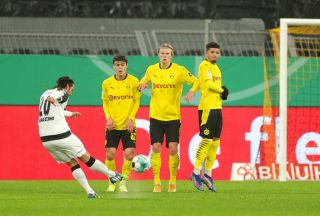 When Erling Haaland signed for Borussia Dortmund it was only a matter of time before Manchester United went knocking on their door with keen interest.

I would even go as far to say it could be the same situation with Jude Bellingham, who joined the Bundesliga club from Birmingham last summer, or Jadon Sancho who is currently one of their best players.

Haaland has some experience working with Ole Gunnar Solskjaer during their time together at Molde. They shared a good working relationship and there’s nothing to stop them uniting at some stage.

When asked whether that previous relationship could help smooth the path to Old Trafford, Solskjaer told VG: “Erling will have a fantastic career. I’m following Erling. I’ve always said that.

“Was it 18 months we had together or something? Almost two years, maybe. A wonderful time. He will definitely have a great career for both Norway and his club.

“He is doing incredibly well for Dortmund, so we’ll see where he ends up. As a Norwegian and someone who has worked with him, it is of course fun that he does so well.

With the exception of Edinson Cavani, who is 33-years-old, United don’t have a world-class striker and that is what Haaland would bring to the table. He’s got incredible potential and his ability to score goals is a sight to behold.

Haaland is now seen as one of the most prolific strikers in world football, scoring 38 goals in just 40 appearances for Dortmund since joining them from Red Bull Salzburg a little over a year ago.

He is currently contracted to Dortmund until 2024, but GOAL claim there’s been reports that a €75m release clause was included in that deal which is due to become active in the summer of 2022.

A scramble for Haaland. We hope to see United involved but it’s a shame he works closely with Mino Raiola.

Read more: Man United predicted line-up vs West Brom: No van de Beek but Diallo to debut from the bench