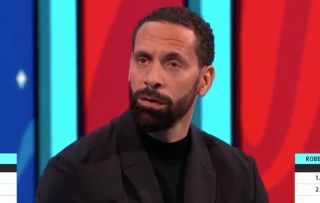 Manchester United are part of the conversation.

Whether it’s winning the title or being part of the race for top four, Manchester United are in a better position now than what they were when Jose Mourinho was fired. There will be some drastic hot takes on social media to tell you why Mourinho is still the special one, but United are a team in transition and that’s not always a happy place.

We seen that under David Moyes, Louis van Gaal and Jose Mourinho. A team constantly in transition; one step forward closely followed by two steps backwards.

Rio Ferdinand and Robbie Savage both gave their predictions for this season’s top four on BT Sport this afternoon, while covering Leicester City v Liverpool in the Premier League.

Both pundits have predicted United to finish runners-up to City this season but they don’t quite agree on where Liverpool will end up. Ferdinand thinks the Scouse will come third in the table but Savage doesn’t think Klopp’s men will finish in the top four.

The former Manchester United youth player thinks Liverpool will finish fifth this season. We’d love to see that, as well as United winning the title!

How will the Premier League's top six look at the end of the season?

Manchester top two? 💪
Liverpool out of the top four? 👀
Everton in Europe? 📈@rioferdy5 and @RobbieSavage8 give their predictions… pic.twitter.com/9QzPy3ueKI