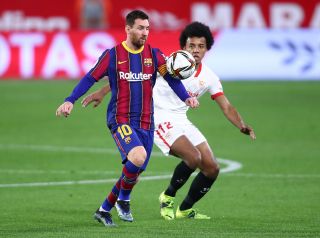 According to multiple reports from respected media outlets, Manchester United are eyeing a potential move for Sevilla centre-back Jules Kounde ahead of the summer transfer window.

According to Spanish media outlet AS, Manchester United, Barcelona and Real Madrid have all enquired about the services of the talented French defender who has an €80 million release clause in his contract.

AS also claim that Sevilla rejected a €55 million bid for Kounde from Manchester City last summer, they opted to sign Portuguese centre half Ruben Dias from Benfica instead. Manchester United manager Ole Gunnar Solskjaer is desperate to solve his defensive issues and find a long term partner for club captain Harry Maguire.

United have tried a number of different centre-half partnerships this season with Victor Lindelof, Eric Bailly and Axel Tuanzebe partnering Maguire throughout the season. The Red Devils have been impressive this season mounting an unlikely title challenge currently sitting second in the Premier League, despite having the worst defensive record in the top half of the table. Solskjaer’s side have conceded 30 goals in 23 games so far this season and will look to shore up his problematic defence in the summer transfer window.

Who is Jules Kounde?

Jules Kounde is one of the most highly-rated young central defenders in European football. The 22-year-old French defender currently plays with Spanish side Sevilla in La Liga. He was born and raised in Paris, France and played for three local clubs Fraternelle de Landiras, Cerons and La Brede FC during his academy career. Kounde impressed at a local tournament and was snapped up by Ligue 1 side Bordeaux in 2013. He joined the Bordeaux academy continuing his development through the youth ranks before featuring for the B team in 2016, where he impressed at centre half making 30 appearances and scoring once in the 2016/17 season.

His impressive performances caught the attention of first team manager Jocelyn Gourvennec who promoted Kounde to the first team for the 2017/18 season and he was rewarded with his first team Bordeaux debut against US Granville in the Coupe de France. The French youngster made 19 appearances and scored 2 goals in his breakthrough season for “Les Girondins”. Kounde quickly established himself as a first-team regular under Gus Poyet, Ricardo Gomes and Paulo Sousa’s set ups, making 51 appearances for Bordeaux in all competitions in his second season. His impressive development and performances in Ligue 1 caught the attention of a host of European clubs with Sevilla’s infamous Sporting Director Monchi enquiring about his services. Sevilla fought off competition from a host of European clubs and signed the promising young French defender from Bordeaux in a deal worth £23 million in July 2019.

The Paris born defender settled effortlessly into life in Seville forming an excellent central defensive partnership with Brazilian Diego Carlos. Kounde made 41 appearances for “Sevillistas Rojiblancos” proving to be a key figure in their fantastic season, winning the Europa League and finishing in the Champions League places in La Liga. He was rewarded for his exceptional performances throughout his debut season earning a place on the UEFA Europa League team of the season. He has continued to impress this campaign for Sevilla, with a number of European clubs tracking his progress and keeping tabs on his potential availability in the upcoming summer transfer window.

Jules Kounde is a gracious ball playing centre-half with the potential to become one of the top defenders in European football. He has become a main stay at the heart of the Sevilla defence alongside Brazilian Diego Carlos as Julen Lopetegui’s first-choice centre back pairing. The right-footed defender is renowned for his excellent range of passing which is crucial in Sevilla’s build up play from the back. He regularly breaks lines from deep with his ability on the ball which is fundamental for the modern centre-half.

Other impressive attributes of the French defender is his athleticism, positional awareness and his pace. The Frenchman excels in one-on-one situations as he has shown with his assured performances in La Liga and Europa League over the last two seasons with his excellent recovery pace one of his biggest strengths. Despite impressive tactical and technical attributes Kounde’s physicality might be a sticking point for future suitors. The French defender is 5”10” which is small in comparison to central defenders in European football which may cause a problem in more physically demanding leagues such as the Premier League. However, his overall tactical positioning, athleticism, impressive jumping ability and recovery pace make up for his lack of physicality.Despite being young the Paris born defender exhibits the calmness of a veteran at the back, emerging as one of the most promising central defenders in Europe.

His ability to play long accurate passes and short accurate passes out from the back would be an excellent asset to a Manchester United side who have struggled to play out from the back under Solskjaer. Kounde’s recovery pace would enable the Red Devils to play with a high line which cannot be played currently due to Lindelof and Maguire’s lack of pace. Physically Kounde might need some time to adjust to the English game due to his 5”10 frame but his other attributes compensate for his lack of physicality. Overall,

Jules Kounde is an excellent young defender who would improve any top European club’s defence immediately. He would be the perfect partner at centre back alongside club captain Harry Maguire, especially under current Manchester United manager Solskjaer.