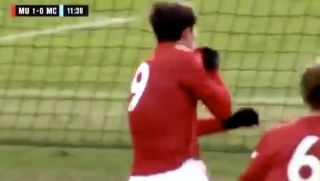 Buzzing for Charlie McNeill this afternoon.

The 17-year-old striker has bounced between the Manchester clubs a few times and today he netted a hat-trick for United against City.

Originally part of United’s academy, McNeill played alongside Mason Greenwood but in 2014 he made the switch to City where his record in front of goal was nothing short of amazing.

This is his second coming at United and he looks a phenomenal prospect.

We love how McNeill celebrated his first goal by kissing the badge.

Charlie McNeill with a hattrick against his former club and celebrates his first goal by kissing the badge. Top red 😂 pic.twitter.com/G4Y0mOC7Ix