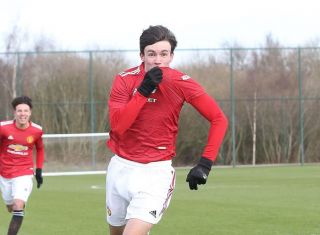 It was a bit cold in the AON Training complex this morning, but the heated Manchester derby did take place in the pitch as United scored four past City.

An eventful match was on the books as Manchester United had a few U16’s come in the bench, while Mainoo had his first start for the U18’s. A special encounter for Charlie McNeill as he faced his former team.

The game starts off well for both teams with the game being played at both ends with Manchester City already showing their teeth in the five minutes of the game. Then it was United which started to pressure high up in the pitch via Bennett.

In the seventh minute, City had a good chance to go ahead as Charlie Savage calms things down in the United end while Emeran is brought down. The game was all City as the ball travelled past the United defence, however no one took advantage of United’s distraction and it ended as a free throw for the Reds.

Before United had their first chance to score, it was Vitek keeping the young Reds in the game again. As it has been noted previously in the other games, United are indeed so brilliant going forward. A perfectly executed corner from Savage finds McNeill near the post and his brilliant header ends at the back of the net. McNeill kisses the United badge much to City’s annoyance. The former City youngster almost doubles United’s lead as a beautiful pass from Emeran is well past the keeper, but McNeill does not make enough contact to score.

City are clearly not happy with the result as they tried to create chances, but United’s pressure on the pitch was constant as a beautiful play by Wellens and McNeill finds Emeran who is brought down in the box. McNeill takes the penalty, but sees his shot saved, however is positioned good enough to smash the rebound in the back of the net. However, it seems that City would be making the move soon and they did as Vitek is again brought in attention as he makes a double save. Two minutes later, City try again but a Bennett block makes it easier for Vitek to get a good save out of the shot.

In an attempt to get a penalty of their own, City players injure Wellens, but manages to continue playing. United keep pressuring while City are always there. In the 38th minute Wellens is brought down in the edge of the box with Emeran stepping up to take the free kick, but his shot is blocked and Jurado was not able to keep the pressure high up. In what seemed a fair play game by both sides, as United gave the ball to City expecting to get it back, City play on and score. In the replay, as given by the circumstances it is seen that neither Jurado who could have had the chance to block Sodje did not, and Vitek on the other hand did not make any move to save the shot.

The referee was adamant to get United’s two goal lead back due to fair play, so McNeill roamed free in the pitch and scores his third goal of the game. In the second half, City seemed eager to get something from this game, as they scored early on. Borges had been a terrible headache for United during the game, this time he is capable to make it past Jurado and pass to Sodje who makes no mistake.

The following minutes are problematic for United’s defence as the movement is limited to the United half, and the City players were going strong left and right. The young Reds again were unable to go out of their own half. City came close scoring four times as the clock was approaching to the 70th minute, but Vitek and luck keep City away from scoring. Another ridiculous decision by the referee as two City youngsters collide in the edge of United’s box and the referee points to a City free kick.

Despite the struggle, the United substitutes help United keep City’s dangerous play out of their box, while Hughes was once again United’s hero as he put Sodje off as it seemed like that, they were almost certain to get their equaliser. As the 90th minute was approaching, Charlie McNeill steals the ball from a City defender on the edge of the box and finishes in a brilliant way. This was City’s first defeat since United won against them in November 2019.