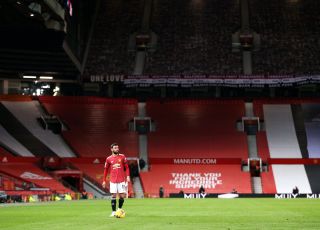 It genuinely saddens me that Bruno Fernandes has only played in front of a home crowd four times since he joined Manchester United a year ago.

The Portuguese midfielder has admitted that he tries to celebrate every strike and success for United as if he was surrounded by die-hard supporters.

It’s a difficult time for everyone but football has carried on during the coronavirus pandemic, although in the Premier League we are still without fans at games.

The driving force behind Ole Gunnar Solskjaer’s side says that he attempts to honour every goal he scores as if the fans were on the terraces rather than the comfort of their very own sitting rooms.

You just know that if the fans were at Old Trafford for every home game, they would be singing Fernandes’ name on repeat. Not to forget our fantastic away support – the best in the country.

In an interview with the club’s official website, Fernandes opened up on how he and his team-mates try to generate their own morale boost in the absence of fans.

“When you score you want to celebrate,” Fernandes said. “Some players when they score they don’t have that feeling to celebrate.

“[That is] because there is nobody there and we have to make our own way to celebrate and make the atmosphere happy when we score as if the fans were there.

“One of the things the fans told me when we started to play behind closed doors is that when we score you need to celebrate like we are there with you.

“I’m trying to do that, sometimes it’s difficult because you are not in the mood and maybe you don’t feel it, but I’m trying to do it like they are there or if they are at home then they are feeling that I’m happy and I am with them.”

I have probably said it a number of times – either on the blog or podcast – but Fernandes is a breath of fresh air.

He admits to being disappointed by the situation but isn’t everyone. No matter your circumstance, I believe this pandemic and the constant lockdowns are contributing to mental health problems.

“[I’m] just a little bit disappointed because, as I’ve said before, coming to the Premier League and coming to play for Manchester United, the atmosphere of the game day, I’m not living that at all,” he added.

“I’m feeling the support of them [the fans] on social media and when we can see them sometimes if I go to the supermarket and they say some words because we can’t be closer than that.

“It’s really good when you have that support [but], of course, coming from the stands would be much better.”