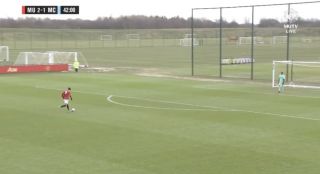 Crazy to see this in a derby match but kudos.

A bizarre moment was captured on MUTV cameras during the U18 Manchester derby.

United’s U18s bagged a third goal which is like something you’d see whilst playing FIFA 21 with your mates.

Neil Ryan’s young side were leading 2-0 when City controversially pulled one back.

However, to ensure the match continued fairly, not that the referees in question managed to do that, City agreed to let United walk the ball from kick-off and into their net.

As a result, United lead 3-1 against their rivals.

Watch both goals below, with footage courtesy of MUTV: