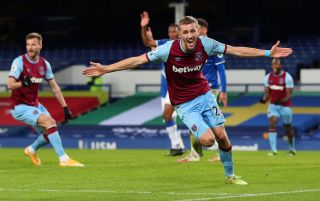 According to reports, it would take a monumental offer for West Ham United to agree to sell midfielder Tomas Soucek to Manchester United.

Soucek, 25, joined West Ham during the winter window in 2020, initially on a short-term loan before making his switch from Slavia Prague permanent six-months later.

Since his arrival in England’s top-flight, the six foot, three inch tall, commanding midfielder has been a revelation.

It is widely accepted among Hammers’ fans that without Soucek’s inspired performances, they may have not beaten the drop last season.

In light of staying in the Premier League last time out and continuing to be under the guidance of David Moyes, the Londoner’s are enjoying one of their most impressive seasons ever.

Currently competing for a place in European football next season, Moyes’ Hammers are one of the league’s most dangerous sides and it hasn’t been without the help of Soucek.

In light of the Czech international’s impressive form, according to a recent report from Football Insider, the 25-year-old has emerged as a shock transfer target for Ole Gunnar Solskjaer’s Red Devils.

It has been claimed that United, who have sent scouts to watch the midfielder, have been highly impressed with his playing style, amid suggestions the club’s hierarchy could put in a bid once the summer transfer window opens.

However, the latest in the ongoing saga comes from Claret and Hugh (as relayed by CaughtOffside) who claim to have some inside knowledge on the current situation surrounding Soucek.

According to the West Ham focused outlet’s report, a club insider has revealed that in order for United to land Soucek they’d need to submit an offer which would “blow the doors off the London Stadium.”

Whilst the statement is ambiguous and leaves a lot to interpretation, it’s safe to say the point is, that it would require a monumental bid, presumably north of £50m.

How highly do you value Soucek? – Let us know in the comments.