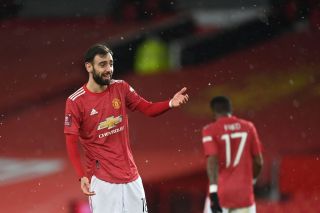 Manchester United will be looking to get back to winning ways in the Premier League when they take on West Brom at the Hawthorns.

The Reds go into the game on the back of a 1-0 victory over West Ham United in the FA Cup whilst the Baggies were defeated 2-0 by Tottenham Hotspur in the Premier League last weekend.

Ole Gunnar Solskjaer is likely to make a number of changes to his starting eleven to face West Brom on Sunday with David de Gea, Bruno Fernandes and Luke Shaw all likely to be recalled.

West Brom currently sit in the relegation zone and have endured a miserable season thus far. Even with the recent managerial change under Sam Allardyce, the club’s fortunes haven’t changed and this is a game which United should be undoubtedly taking all three points from.

The Baggies defence has already shipped 36 league goals this season the worst in the division and it’s that defence which Solskjaer will undoubtedly look to exploit on Sunday.

With Rashford, Fernandes and Martial all likely to start United have more than enough quality up top to cause the opposition back four havoc.

With games coming thick and fast over the coming weeks its essential United take all three points from this.

We don’t want this game turning into a banana skin game for United and a goal early on could make all the difference. It would force West Brom to come out and play leaving gaps at the back for United to take full advantage of and an early goal in this could go a long way to settling this match for the Reds and in doing so keep the club hot on the heels of Manchester City at the top.