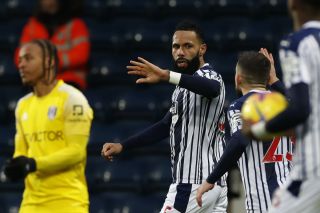 West Brom will be looking to cause an upset this weekend when Manchester United travel to the Hawthorns.

Sam Allardyce is in charge of the Baggies trying to keep their Premier League status, however, Ole Gunnar Solskjaer has other things in mind. Like getting his team back to winning ways in the league and mounting some sort of title race.

United qualified for the FA Cup quarter-finals during the week after beating West Ham 1-0 in extra-time. It wasn’t a good performance but the result should give the lads a boost.

Ultimately, we cannot have a repeat of what happened against Sheffield United in January. That defeat still hurts and we’ll probably find ourselves talking about it for another while.

West Brom’s Kyle Bartley is confident his side can get a good result on Sunday. He is adamant that they can come away with at least a point from their upcoming game.

“If you look at our performances this year, bar a couple, we’ve given the so-called big teams a good game,” Bartley told the West Brom’s official website.

“We drew at Anfield, drew at the Etihad, and at Old Trafford we were really unlucky not to get anything.

“So we’ll go into this game knowing that if we perform to the best of our abilities, obviously we’ll need a little bit of luck, but we can definitely get a result.”

It’s huge to our season that we can find another winning run in the league — but we’ve also got to look at the FA Cup as a competition we can win.

You’ve got to fancy our chances — even after drawing Leicester City in the quarter-finals — if you believe that this side is improving and heading in the right direction.

Now is the time to get over that semi-final hurdle and show consistency in the league. Let’s try not make this more difficult than what it needs to be.