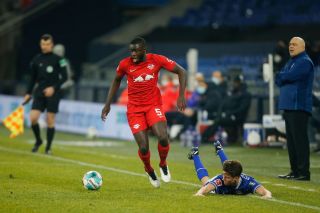 RB Leipzig defender Dayot Upamecano has reportedly chosen his next club, but like we reported earlier this week it doesn’t concern Manchester United.

The French centre-back had been linked with a transfer to Manchester United where there’s demand for a world-class defender, but those claims were squashed earlier this week by Italian journalist Fabrizio Romano.

He tweeted: “Manchester United have never been in advanced talks to sign Upamecano – always been appreciated but ‘unlikely’. He’s the main target for Bayern Münich prepared to pay the release clause, Chelsea and Liverpool are still in the race. Also PSG interest now cooled down.”

The Guardian report Upamecano can leave the Bundesliga side for £37.3m this summer, and that United are pursuing other transfer targets. That, of course, was backed up today by an ESPN article claiming United have a defensive shortlist containing four centre-backs.

Moreover, the ESPN report goes into a little more detail about why United haven’t tried harder to win the race to sign Upamecano.

RMC Sport journalist Loic Tanzi reveals Upamecano has an agreement with Bayern Munich to sign in the summer after they meet his buyout clause at RB Leipzig.

Judging by Romano’s tweet yesterday Chelsea and Liverpool were both guilty of having false hope on the transfer front. It seems he has always been Bayern bound.