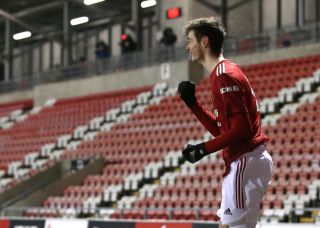 Manchester United continued their Premier League 2 campaign against Arsenal with Amad Diallo absent because of illness, while several other players are injured and the rest being out on loan.

It was indeed a surprise, as we expected Amad to feature again given the injury crisis. Despite this, United held into the game well, scoring three goals and also keeping a clean sheet, boosting Kovar’s confidence given the difficulties he has faced this season when on loan.

The game started off well for both teams as they had early chances, with Arsenal having a great moment, but Kovar’s intervention was more than enough to deny the young Gunners.

While United were once again trying to keep balance with a makeshift defence, Arsenal were not trying hard enough to get something from the situation. However, Hannibal Mejbri was brought down in the eighth minute and the referee gave a penalty to United while also sending Oyegoke off.

It was Hugill who stepped up to take the penalty, but his shot was saved, and he slipped in the way of getting a rebound shot. Despite this United kept trying, with Shoretire moving well around the midfield and shifting in attack, but they still could not find the back of the net. A few moments later, Mejbri was brought down again in the penalty box with the referee waving play on this time, however the player was feeling a discomfort in his shoulder but was able to continue.

A brilliant ball from Shoretire found Hugill who in his side made no mistake this time to pass it to Harvey Neville who managed to get the ball past the Arsenal keeper. United were now trying to keep calm, however being hit from another injury as Mejbri was not able to continue any longer being substituted from Hardley. As of now, Hardley would cover in the defence, while Ethan Galbraith would move in the midfield alongside Helm.

In the other end, Arsenal had a brilliant chance to level things up, as Balogun was left unmarked in the box, but Kovar was cautious enough to make a good save out of it. The first half surely has not been as eventful as we expected, but an Arsenal own goal was almost bound to happen as once again their keeper does well enough to keep them in the game. United’s attempts to score a goal did not end up here as Shola Shoretire won a free kick at the edge of the box and also took over it. Yet, his brilliant free kick found the bar. Another free kick this time, beautifully executed from Galbraith is deflected by the keeper.

While United were expected to make their dominance in numbers noted, Arsenal in the first five minutes did much better even targeting the United goal twice via Balogun and Akinola. The young Reds did manage to keep the pressure high up and this time it was Connor Stanley’s time to hit the bar and Shoretire was brought down in pain in the aftermath but was fine to continue. Meanwhile for all of those worried about Mejbri, he seemed to be doing well in the sidelines following the game closely, a bit in Ole Gunnar Solskjaer style with an iPad in his hands.

As United were looking to double their lead, this was able via a Shoretire pass who played Fernandez through and the Spaniard’s low cross found Hugill who flicks it past the goalkeeper’s legs. At first, it did not seem that the ball had crossed the line. Fernandez kept doing well in the second half as another of his crosses found McCann this time, but he was unable to take a good aim of the goal and hit a defender in the process.

McCann also has another good chance to score a third for United, who did it all well, but fires the ball over the bar. Two minutes later, it was Mark Helm’s time to have another go at the bar, this time from the edge of the box. Just a few minutes to the end of the match, Shola Shoretire beats his man, but is brought down in the process and penalty given. Shoretire manages to score the penalty and the game was over for Arsenal now.

Joe Hugill and Shola Shoretire continued their fine goalscoring form in the second half, as our young Reds claimed a third straight #PL2 win 👏 pic.twitter.com/hj3bIXGbev

The Reserves manage to win an important game in an entertaining way despite the injury crisis they have.

One response to “Report: Man Utd U23s lose Mejbri to injury in a 3-0 win v Arsenal as Shoretire shines”