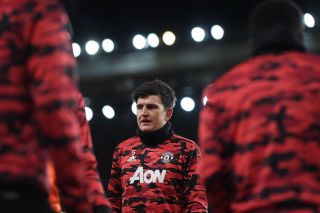 Harry Maguire gets his share of criticism and as a Manchester United player it is something he is always going to deal with.

People will point to the mistakes he makes and why they think he shouldn’t captain, but I still look at the Maguire acquisition with some positivity. This isn’t the second coming of Rio Ferdinand but it’s a huge upgrade from the likes of Phil Jones, Chris Smalling, Marcos Rojo and Victor Lindelof.

But ultimately United need more quality at the back to proper strengthen their defence.

Maguire has been savaged by former United right-back Paul Parker.

“Harry Maguire is not a leader, he plays the game for himself, he sits way too deep, he dribbles for the sake of dribbling and runs himself into cul-de-sacs,” the ex-Old Trafford told The Sun.

“The goal against Sheffield United, he put David de Gea in a terrible position, and he made a terrible clearance which people then blamed the goalkeeper.

“Sometimes you need to look at the build-up to see the mistakes.

“I have always been unsure about Maguire since the day Manchester United signed him.

“When they paid £80m, the club didn’t buy an £80m centre back, it was great business by Leicester.

“Despite the position that Manchester United find themselves in the Premier League, they still need to strengthen in the transfer market this summer.

“Bringing in competition for places always helps players to improve their game.

“You look at Luke Shaw this season, he has really upped his game since the signing of Alex Telles.”

You could say Parker has a point because Maguire is the world’s most expensive defender, but we all know that’s an unfair stick to beat him with.

United pay the transfer fee and now it’s down to Solskjaer to find the right defensive partner for the England international.

Not too long-ago people were talking about Maguire in the same vein as Virgil Van Dijk, but would you rather have Liverpool’s current situation at the back? No chance.