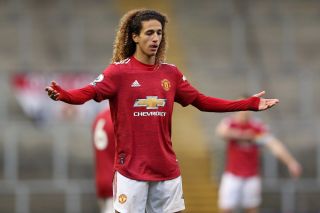 Ole Gunnar Solskjaer is continuing to reward his impressive youngsters with first-team opportunities as midfielder Hannibal Mejbri becomes the latest name to be promoted.

Mejbri, 18, joined United’s youth academy in 2019 after making a £9m switch from French side Monaco, as per Transfermarkt.

Since his arrival, the talented midfielder has impressed immensely and has even seen his performances draw comparisons to first-team star Paul Pogba.

After featuring in 36 matches for the Red Devils’ under-18s and under-23s sides, Mejbri has already racked up a respectable 18 direct goal contributions; exactly one every other game.

In light of the young Frenchman’s impressive development, according to Solskjaer, Mejbri is set to be promoted to the club’s first-team.

Worth noting – Although Mejbri will train with the senior side, the teenager is still expected to feature in under-23 matches under guidance of youth manager Neil Wood.

Speaking in a recent press conference, as quoted by MEN, Solskjaer said: “The young kids, we’ve moved Shola up with us, Hannibal will join us and we’ll keep them with us for a while.

“It’s the next step in their development, we’ve got to take the hit that when they play for the reserves they have to travel by themselves. It’s a nice step for them, they’ve done really well.”

It is not yet known when fans can expect these next set of youngsters to make their senior first-team debut, although it was widely accepted that Diallo could be awarded his any day now.

Following on in this club’s great tradition, the future certainly looks bright for Solskjaer and his youngsters.