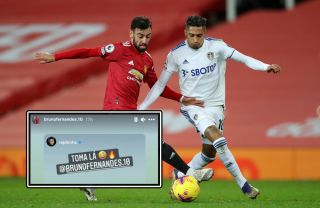 The pair engaged in an Instagram exchange which saw the Brazilian winger show-off some insane ball skills.

After joining Leeds United last summer from French side Rennes, the exciting attacker has already hit the ground running in England’s top-flight.

After being directly involved in eight goals from his first 17 Premier League appearances, there appears to be genuine excitement surrounding this 24-year-old.

Raphinha is reportedly a summer transfer target for Jurgen Klopp’s Liverpool, as per France Football (via Daily Mail), but could it be that Fernandes’ obviously rating of his former team-mate may prompted United to take a closer look?

Read more: Instagram to ban accounts for racist abuse after attacks on footballers