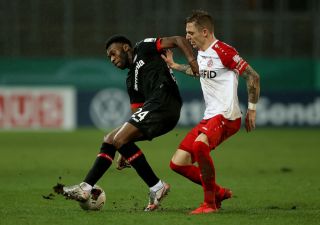 Fosu-Mensah, 23, spent just over six-years at United after joining their youth academy from Ajax all the way back in 2014.

Despite enjoying a string of successful loan spells with the likes of Crystal Palace and Fulham, Fosu-Mensah struggled to nail down a place in Ole Gunnar Solskjaer’s first-team plans.

After featuring in just 30 senior matches, in all competitions, the Dutch defender was allowed to move on in an attempt to reignite his stagnating career.

Fosu-Mensah joined Bundesliga side Bayer Leverkusen during the winter transfer window, in a deal worth just £1.53m, as per Transfermarkt.

After already racking up four first-team appearances for his new side, Fosu-Mensah finally appears to have found happiness in Germany.

Speaking in a recent interview with The Independent, the 23-year-old has explained why he left United.

“Yes, it was my decision,” Fosu-Mensah said. “It was difficult because I ruptured my ACL after my loan spell at Fulham. I was out for a long time. I came back, Solskjaer gave me the minutes, they triggered the option in my contract.

“I didn’t play much and I wanted to play. I think it was the best decision in the end for me to go somewhere else where I would get more minutes.”

Despite still thinking highly of his former manager, Fosu-Mensah could be gifted the chance to meet his former club in the Europa League later this season.

After crashing out of the Champions League at the group stage, United, once again find themselves in Europe’s second-rate competition.

With Fosu-Mensah and the rest of his Bayer Leverkusen team-mates set to face Young Boys in the Round of 32 and United facing Real Sociedad, the two sides could still meet later on in the competition.