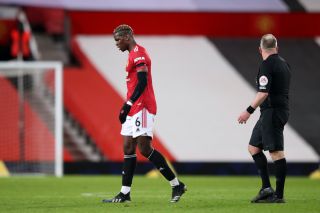 Paul Pogba’s outspoken agent, Mino Raiola, has once again made comments that will make the headlines.

The comments are brought to us this evening from reliable journalist Fabrizio Romano, who regularly features on Sky Italia and The Guardian with updates on the latest football transfers.

Raiola was present at a Serie A meeting on Thursday afternoon when he was quizzed about a potential return to Italy for his client.

“Paul Pogba to Juventus? I can’t speak about Pogba because people are nervous, they don’t sleep at night. I have to work quietly… If I speak, someone gets offended,” Raiola said.

Mino Raiola: “Paul Pogba to Juventus? I can’t speak about Pogba because people are nervous, they don't sleep at night. I have to work quietly… If I speak, someone gets offended”. 🔴 #mufc #juventus

I can only wonder who that is a dig at…

But with Pogba’s current contract at United ending next year we can expect speculation to be rife as to whether he will extend his contract or push for a move.

Raiola is stirring the pot and he’s never been afraid to do that. All he cares about now is Pogba’s next deal.

Pogba will miss United’s next match away to West Brom in the Premier League due to injury. For that reason alone, Pogba shouldn’t be the focus over the coming days.

I hope the journalists at Friday’s press conference don’t waste their time asking Solskjaer about Raiola’s comments. The Italian agent is such a bore and I really wouldn’t be surprised if the club told him to zip it.