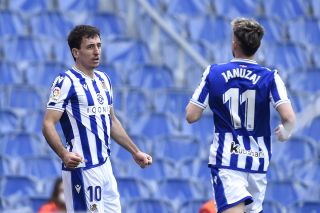 La Real’s star player is set for weeks on the sidelines and is likely to miss both legs against Manchester United in the Europa League.

Real Sociedad striker Mikel Oyarzabal has sustained a hamstring injury and will miss his side’s upcoming Europa League clash with Manchester United as a result.

The news will come as a huge blow for La Real, with the 23-year-old scoring 12 goals and registering five assists in all competitions so far this season.

In a statement on Thursday, Real Sociedad said (translation via GOAL): “Mikel Oyarzabal has presented with tendinopathy in the proximal hamstring tendons of the right thigh.

“He has begun physical therapy treatment. A return to action will depend on the evolution of his symptoms.”

It looks like it will be the tail-end of March before Oyarzabal will be back playing football, so he could miss important fixtures not only against United, but Spanish giants Barcelona and Real Madrid.

Huge blow for Real Sociedad ahead of Manchester United tie in Europa League. Their best player Mikel Oyarzbal has a hamstring injury and will likely miss both legs. https://t.co/XMsOzEolzd

Oyarzabal has 10 La Liga goals to his name this season which is just 3 short of Barcelona’s Lionel Messi.

Solskjaer must make a decision whether to rest players in the Europa League, in order to keep them fit for our domestic fixtures (United should be looking to challenge for the title and go all the way in the FA Cup this season), and we’ll soon see how serious he will be taking the second-rate competition this season.

United reached the semi-finals of the Europa League losing to Sevilla last year.