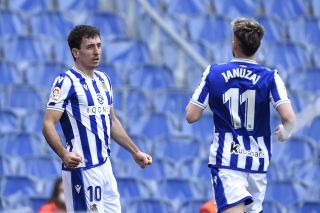 Manchester United could be set to be handed a huge boost in their Europa League campaign after Real Sociedad’s star Mikel Oyarzabal was injured during a recent training session.

United are set to play Real Sociedad on February 18 in the Europa League’s Round of 32.

After being dumped out of the Champions League at the group stage, Ole Gunnar Solskjaer will be hoping he can enjoy another deep run in Europe’s second-tier competition.

Despite reaching the competition’s semi-final stage last season, the Red Devils will be hoping to go at least one better this time around.

After being drawn against La Liga side Real Sociedad in the competition’s first knockout stage, despite being overwhelming favourites, there is no denying that the tie could still prove to be a tricky one.

However, according to a recent written report from Diario Vasco (via Sports Witness), United’s opponents could head into the important knockout tie without their star attacker.

It has been claimed that Oyarzabal, who has been directly involved in 18 goals from 25 matches so far this season, pulled up injured in a recent training session.

The attacking winger, who primarily operates on the left-flank appeared to pull a thigh muscle and there are genuine concerns in Spain that the 23-year-old could miss his side’s tie against United next week.