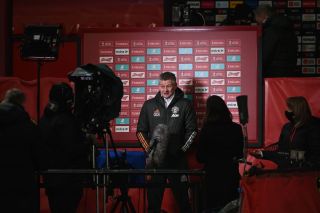 Manchester United are on the road in the next round of the FA Cup after beating West Ham 1-0 at Old Trafford.

The quarter-final draw was made this evening and shown live via YouTube.

It’s a difficult draw for Ole Gunnar Solskjaer’s side but if we want to win the FA Cup this season we need to beat whoever is put in front of us. And we did that against Liverpool in the earlier rounds.

The Foxes are doing well in the Premier League, currently at United’s heels, but I’m sure Brendan Rodgers will want to bring a trophy to the King Power Stadium. Now it’s up to United to ruin that and I think we will.

Winning the FA Cup this season would be huge for the squad and we really need to clear that semi-final hurdle. Solskjaer has lost four semi-finals as United manager and he knows it won’t be long before people are asking where are the trophies.

So, we can accept this is a difficult draw for the lads but we’re in the FA Cup to win it. The objective is to win this match, the next and a Wembley final on top of that.