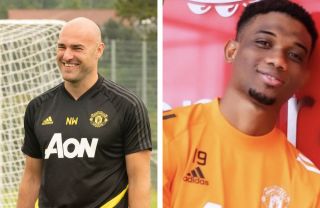 Manchester United’s under-23s manager Neil Wood has spoken out about how new-signing and wonderkid Amad Diallo is impressing the club’s coaches.

Diallo, 18, agreed to join United during last summer’s transfer window, however, due to work permit complications, the teenager was forced to wait until the winter window to complete his move, as per ManUtd.

Since his arrival in Manchester, the highly-rated winger has been introduced to England’s top-flight via the club’s youth side.

In an attempt to introduce him slowly to the Red Devils’ senior first-team, Ole Gunnar Solskjaer has opted to award Diallo will valuable minutes for the under-23s first.

The hype surrounding the 18-year-old has been amplified by the fact he has scored three and assisted three in just his first two appearances in for the under-23s, in all competitions.

Despite being named among the substitutes during United’s Fifth Round FA Cup tie against West Ham United earlier this week, Diallo was forced to wait on his debut after Solskjaer opted against bringing him on.

Speaking in a recent interview with MEN, the club’s under-23s manager Neil Wood has spoken very highly of Diallo and explained what the teenager is doing well.

“You see he has ability and he’s linking up well,” Neil revealed. “He doesn’t really have a relationship with any of these boys here. He came to Liverpool [last] Saturday and did well and the same [against Blackburn].

“He’s training with the first team and doing well and he’s still new to England and the style of football in England so it’s going to take time and like all young players you have to be patient with them. He’s gaining more confidence as the days go on.”