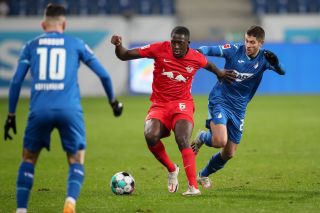 Konate, 21, has been with RB Leipzig since 2017 when he made the switch from French side FC Sochaux-Montbeliard.

After featuring in 86 matches in all competitions for Julian Nagelsmann’s side alongside the hugely rated Dayot Upamecano, Konate’s rise has flown somewhat under the radar.

The talented young defender who is known for his resilient, no-nonsense style of defending appears to finally be attracting the interest of some of Europe’s biggest clubs.

According to a recent report from the Independent, the French centre-back is a target for Chelsea and Liverpool as well Ole Gunnar Solskjaer’s Red Devils.

The report claims that Solskjaer’s number-one priority position in the summer is now a new centre-back and with Bayern Munich leading the charge for Upamecano, the Norwegian has turned his attentions to Konate.

It is not yet known what kind of transfer fee RB Leipzig will demand for Konate, but with no known release clause, it’s expected he could leave for a greater sum than Upamecano.

Which centre-back would you rather sign, Upamecano or Konate? – Let us know in the comments.