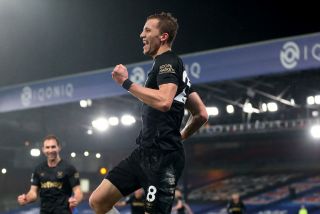 Soucek, 25, only joined the Hammers 18-months ago after making a £14.58m switch from Czech side Slavia Prague, as per Transfermarkt.

Since his arrival, the six foot, three inch tall midfielder has impressed immensely and has arguably been one of David Moyes’ most influential players.

Despite playing in a central midfield role, Soucek has emerged as a constant source for goals.

Naturally, after enjoying such a rich vein of form, the 25-year-old’s long-term future is beginning to be speculated.

According to a recent report from Football Insider, one club who have been taken back by the midfielder is Old Gunnar Solskjaer’s United.

It has been claimed that the Red Devils have recently sent scouts to monitor the 25-year-old’s performances, all of whom have been ‘wowed’ by his ability.

It is not yet known how much West Ham would demand for Soucek, or even if they’d be willing to cash in him.

However, it has been noted that the Red Devils could be lining-up an offer for the summer transfer window.