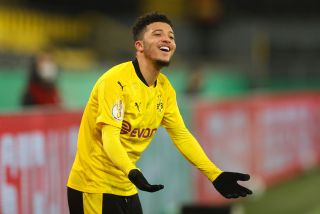 Jadon Sancho is ’90 per cent’ likely to leave Borussia Dortmund in the summer, according to reports.

Ole Gunnar Solskjaer wanted to sign him last summer but a deal never materialised, although Borussia Dortmund seem to find themselves in a position that they could do with the financial rewards of selling a prized asset like Sancho.

The Guardian ran a report in September claiming United were preparing a €90m bid for the England international, however, Dortmund felt that would not be sufficient. The report also points to Dortmund’s position on Sancho which was they didn’t want to sell one of their best players.

Dortmund chiefs didn’t expect the team to struggle on the pitch like they have done in the Bundesliga this season, currently sitting sixth and likely to lose Sancho in the summer.

According to Sky Sports Germany, Sancho is set to be up for grabs during the next transfer window, which could lure United into approaching the player’s representatives. We can’t forget how heavily linked he was with a move to Old Trafford last summer.

A right winger with an eye for goal is what the team needs right now, so I think this is a story to keep tabs on for the coming months.

German source WAZ claim Dortmund have drawn up an eight-man shortlist of players they want to sell in an attempt to recoup losses caused by the coronavirus pandemic.

I’d be asking questions about Bellingham too!