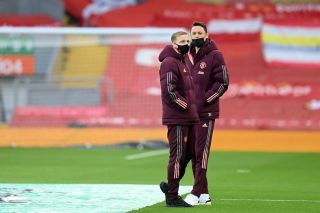 For a nation of 17.28 million people, the Netherlands have proved remarkably adept at producing a pantheon of silky, skilful and golden crusted, 24-carat footballers.

Manchester United have been no strangers to the mightiest talents from a proud football nation, a country schooled on the nuances and subtleties of the Beautiful Game. From Robin van Persie, Ruud van Nistelrooy, Jaap Stam and Edwin van der Sar to name but four, some of the Oranje’s finest have flourished spectacularly at Old Trafford.

When Donny van de Beek arrived from Ajax with a £39m price tag in the summer, as per Sky Sports, all the noises coming out of those he left behind suggested that here was a man who would do the same.

After all, a player schooled in the world renowned philosophy of “Total Football” had to have something about him – even Van Der Sar, one of our greatest ever keepers but now director of football with the Amsterdam giants, was quick to champion the qualities and skillset of van de Beek.

Unfortunately, in his seven months in Manchester, Van de Beek has so far turned out to be more Memphis and Alexander Buttner than RvP and RvN. He carries the air of a player who is all hype but with little to show for it.

It took some doing to fade to the periphery of a match that certainly won’t live long in the memory, but yet somehow Van de Beek managed it. Handed a rare start with Bruno Fernandes rested against West Ham, instead Van de Beek ran like nobody was watching for much of what came before. He looks completely and utterly lost in the Red of United – all at sea, out of place and completely incompatible with the stresses of strains of our 100mph English game. It was a miserable 120 minutes of an FA Cup tie, and a miserable 73 minutes for Van de Beek on his 25th appearance for the club. He was fortunate to last that long. The only question was how long Ole Gunnar Solskjaer would watch this arrhythmic amble before he changed the tune. When the end inevitably came, you had to feel for him a bit as Van de Beek forlornly looked over to the touchline and saw his number up in lights, heralding the end of another evening that amounted to the square root of not much at all.

Solskjaer has had criticism for not giving the Dutchman enough game time but yet, on this evidence, came you really blame him? You have to earn that chance, but Van de Beek simply hasn’t. Every time he has been given an opportunity, he has failed to grasp it.

It’s no wonder Solskjaer doesn’t seem to trust him, or have faith in the player yet. Indeed, it makes you wonder whether the United manager even ever wanted him at all. If it wasn’t for the effects of a freak pandemic for the ages that crushed the world’s economies, the previously Real Madrid bound Van de Beek would be locked in to the Bernabeu by now. His stats made for impressive reading – 33 goals and 27 assists from midfield in 141 Eredivisie and European games. Admiring glances from Real Madrid, kudos from a United legend and impressive numbers – it seemed we were getting an excellent player with burgeoning potential. Sadly, it simply hasn’t worked out that way. His influence – or, more pertinently, lack thereof, has flown in the face of such glowing character references.

Perhaps it’s became he hasn’t had a run of games. Perhaps it’s because we expected him to be something he will simply never be. Maybe he’s struggling to adapt to the pressure of a new team in a new league and a different role, in an alien environment a world away from the technical piece de resistance of his native homeland. Perhaps he simply isn’t good enough. Whatever the reasons, Van de Beek looks a man at odds with himself – a thinking footballer thrust into a side that plays on instinct, a man who moves trying to do the job of a man who finds movement. Either way, the situation already looks irretrievable – we’ve already reached the point where it’s hard to see a future for Van de Beek at Old Trafford. I spent most of the match trying to work out what he does.

I don’t want to make this sound like a personal vendetta or an attack against the player, but I just do not see what he offers, or what he’s supposed to be. Is he a ten? A six? An attacking player, or a box-to-box playmaker? There’s simply no identity – baffling for someone signed from a club synonymous for exactly that.

He was caught offside more times against West Ham – twice – than he created chances or had a shot. Everything’s very safe with Van de Beek – a five yard pass here, a quick lay-off there. Compare that to Bruno’s all-action play, how he never stops running, always looks to make things happen and nearly always does. By contrast, Van de Beek often seems to wait for things to happen.

Yes, Fernandes does lose the ball on occasions but he takes risks, always wants the ball and is always driving the team forward. Van de Beek is in the unenviable position of back-up to the best man, the understudy to the undroppable, the bridesmaid to Fernandes’ bride.

As if to add insult to metaphorical injury, not only did Van de Beek sleepwalk through the contest, but he was upstaged by a player who epitomises everything we thought we were getting in the Dutchman.

Scott McTominay, enjoying the best season of his fledgling career, came on and instantly offered everything Van de Beek didn’t – he quickened the tempo, made runs, broke the lines and created attacks.

Indeed, McTominay’s goal came from a run that van de Beek would relish from that position – arriving late into the box to thump home the winner. It was his seventh goal of the season, only further highlighting the anonymity and anodyne performances of his perhaps more illustrious colleague. Van de Beek has played roughly half as much football as a player nowhere near his technical level, a damning indictment of a sorry state of affairs.

There could well be a whole plethora of reasons, but right now Manchester United and Donny van de Beek look a rotten match.