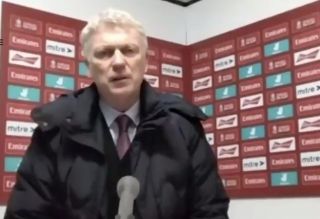 David Moyes was not happy to see his West Ham side crash out of the FA Cup.

The West Ham manager held a press conference at Old Trafford after watching his side lose 1-0 in extra-time against Manchester United.

Listen to the snippet below which shows Moyes arguing that the Hammers were denied a penalty in the game — courtesy of Caught Offside.

Reporter: “What is the penalty incident you mentioned?”

Moyes: “In the 90th minute, there was a block with his arm from Wan-Bissaka.”

Reporter: “What did the referee say about not going to VAR for it?”

“I didn’t ask the ref, we just got on with it. I think if it had been earlier in the season he would have given it.”

Even David Moyes doesn't sound convinced by his own claims that West Ham were denied a penalty tonight pic.twitter.com/9LbVuWB0OK

Moyes stumbles a number of times and pauses when talking about the incident.

There was no appeal from the players and the commentators didn’t make a big deal of it. On top of that, I don’t think Moyes sounds convinced by what he’s saying.

You can catch the highlights from MOTD on the BBC website, but it looks like the ball only flicks off Marcus Rashford (not Aaron Wan-Bissaka like the West Ham manager says) midriff.