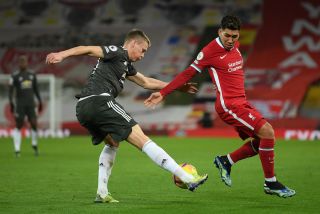 Although Firmino is pretty overrated, that is not an opening paragraph I expected to be writing this year, and it’s further proof that McTominay is becoming a super player.

As things stand, Manchester United midfielder McTominay has a higher goal tally than Liverpool front-man Firmino this season after his goal against West Ham in the FA Cup fifth-round.

The Scotland international has been in superb form recently – building on what was a good campaign in 2019-20 for the Academy graduate.

Firmino is Liverpool’s main striker and his finishing ability has been questioned this season. There’s always been more to his game than finishing – like McTominay – but it’s great to see a United midfielder outscore a Liverpool striker who plays every week.

The Brazilian used to be a player who made Liverpool tick but at Anfield they’re now asking whether his time is up.

Moreover, McTominay’s numbers put Firmino to shame but what matters is we win a trophy this season and kick on again next term.

Fancy McTominay to score against West Brom this weekend?