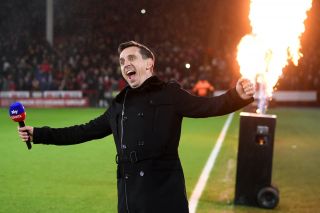 Gary Neville has named as many as five signings Manchester United need to challenge in the Premier League next season.

As things stand, I guess you could say Manchester United already look like title contenders, but we are some way off competing with league leaders Man City.

Pep Guardiola’s side are trying to win back the Premier League after Liverpool were crowned champions last season.

I don’t think the Scousers are a threat this season and I would be surprised if they spent big in the summer. Either way, United should be stronger after dipping into the summer transfer market.

City are clear favourites but Neville suggests that more additions to Solskjaer’s squad could be needed.

Speaking on his podcast, Neville said United should look at signing a new centre-back, a new full-back, a right winger, a striker, whilst also naming the goalkeeper position as one that may need some attention.

David de Gea looks to be in decline and Dean Henderson hasn’t exactly pulled up trees when he’s played this season, though was lucky to have a quiet night between the sticks on Tuesday against West Ham in the FA Cup. The jury is still out on that one but ultimately, it’s a big call for Solskjaer to make.

“Manchester United are just not quite there in terms of winning the title,” Neville said on his podcast (via Sky Sports).

“I think they are on the right track. I would expect them to challenge next season.

“I would expect that there will be [a new] centre-back at the club, [and] maybe another full-back.

“The goalkeeping situation is one that needs monitoring, no doubt.

“Right wing will be interesting, and centre forward, depending on how [Mason] Greenwood settles in the last few months of this season.”