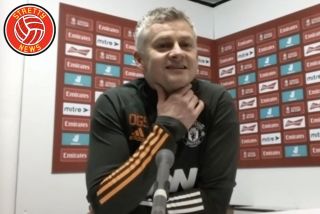 Manchester United are through to the FA Cup’s quarter-finals.

Although the game against West Ham eventually ended in a win following an extra-time winner from Scott McTominay, there were concerns earlier in the match after striker Anthony Martial clashed heads with Issa Diop.

The pair fairly competed for the ball following a West Ham corner with Diop appearing to come off slightly worse.

The Hammers’ defender was subbed off due to concussion protocols with Martial deemed okay to continue.

Speaking after the game manager Ole Gunnar Solskjaer has confirmed that Martial has suffered no lasting effects, hinting that his number-nine will be available for selection next weekend.