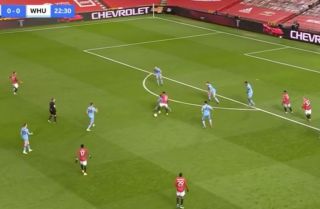 Skills to pay the bills but yet to open the scoring.

A half-hour has been played at Old Trafford and it’s still Manchester United 0-0 West Ham.

The Red Devils have played well in parts but lack the urgency needed to take the lead.

Our build-up play has been patient (a bit too patient) but we’ve pressed whenever West Ham have had possession of the ball. It’s the very least we can ask for but the clock is ticking and Ole Gunnar Solskjaer will want a goal before half-time.

Marcus Rashford had a moment for the cameras outside the West Ham box when he did a Zidane-esque pirouette on the ball to beat his man.

Unfortunately, nothing celebratory came of the move.