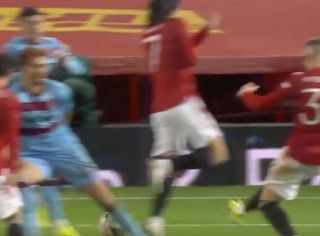 It looked like a handball after Fred’s cross but it didn’t matter because Scott McTominay was alert to hit it first time as Manchester United take the lead in extra-time against West Ham.

To add to his goal in the third round of the FA Cup, Scott McTominay gave United the lead over West Ham in extra-time tonight.

Arriving into the box at the right time like all world-class midfielders do, the Scotland international is proving to be an ever-growing presence in Ole Gunnar Solskjaer’s side, and we’re not surprised to see him put United in the lead.

It’s great to get the first goal (and hopefully last) of the game but I doubt Solskjaer will be pleased with the overall performance.

The first 90 minutes would put a crowd of insomniacs to sleep.

It’s been a pretty dull game that needed a goal long ago.

We’ll be happy if this saves us from a penalty shootout and United qualify for the next round.