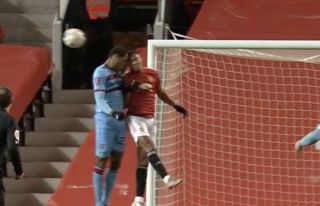 Manchester United striker Anthony Martial put his body on the line when it came to defending a West Ham corner.

The French striker who is back in action during Tuesday night’s FA Cup clash against West Ham was tasked with man-marking defender Issa Diop.

In what was a decent whipped in corner, Martial executed a brilliant leap as he got just enough on the ball to head it clear.

Despite the striker’s valiant efforts, he was unable to avoid the threat Diop’s competitive jump posed.

Although totally accidental, the pair collided mid-air and a nasty clash of heads inevitable followed.

Both players recovered from the clash but credit to Martial for doing the dirty work at the other end of the pitch.