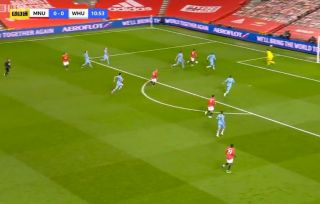 Manchester United are in complete control of territory and possession early in their FA Cup fifth round tie against West Ham at Old Trafford.

Ole Gunnar Solskjaer has made six changes to the side that drew 3-3 to Everton in the Premier League three days ago but United’s attacking flow does not appear to have gone.

United’s best moment in the early stages was preceded by some superb interplay by Brazilian left-back Alex Telles.

Telles replaced Luke Shaw in the starting lineup this evening and exchanged passes with Marcus Rashford before feeding through Anthony Martial who made a run in-behind.

Martial’s left-footed shot was blocked bravely by Angelo Ogbonna but it was the type of run Solskjaer would love to see the Frenchman make more of when leading the line.

Ogbonna was hurt after Martial’s follow through and had to replaced by Issa Diop.