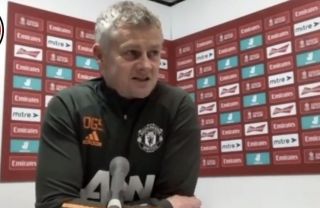 Scott McTominay is really flourishing in this Manchester United side.

Ole Gunnar Solskjaer praised the developing midfielder after his match-winning display off the bench against West Ham tonight.

Manchester United booked their place in the FA Cup quarter-finals after beating West Ham 1-0 at Old Trafford, thanks to an extra-time winner from Scott McTominay.

McTominay came on towards the end of the second half with Bruno Fernandes, while Nemanja Matic and Donny Van de Beek made way after an uninspiring display.

The Scotland international took his goal very well and you could tell how much it meant to him afterwards.

Solskjaer hailed McTominay in his post-match press conference, as seen in the video below.

The Norwegian the reporters: “Scott [McTominay] has really developed that part of his game this season. Of course, we let him go into the box more often. Unleash him. He’s a very good striker and a very clinical finisher.”

OGS 💬 "Scott [McTominay] has really developed that part of his game this season. Of course, we let him go into the box more often. Unleash him. He's a very good striker and a very clinical finisher." #MUFC pic.twitter.com/5SCVE5YiFz

Solskjaer explains that McTominay was a striker during his time with the club’s Academy. It’s no wonder that he’s becoming a prolific scorer from midfield.

It’s great to book our place in the next round of the FA Cup but, while the game was pretty dull throughout, it should be seen as a character building practise with McTominay taking some responsibility.

We had opportunities in the game when our forwards would pass sideways rather than shoot.

For McTominay’s goal the midfielder simply burst into the box and hit the target. No messing about.