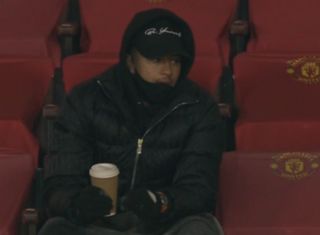 Jesse Lingard can’t play against his present club tonight due to a clause in his loan deal at West Ham.

But the England international is still at Old Trafford and we’re sure he will be rooting for his Manchester United team-mates to get the win and reach the last 8 of the FA Cup — being the United fan he is.

It’s been a quiet game so far with United patient in their build-up play.

They will need to up it a level or two if they want to take a lead into the dressing room at half-time.

The BBC cameras spotted Lingard in the stands at Old Trafford, as seen below:

David Moyes will miss Lingard tonight because he’s been a key player for the Hammers in his 2 appearances for the club. He gives them something else in attack and I hope he can rediscover his form because it’s been so long since Lingard has played regular football.

I wonder if he’ll jump off his seat after a Marcus Rashford winner?