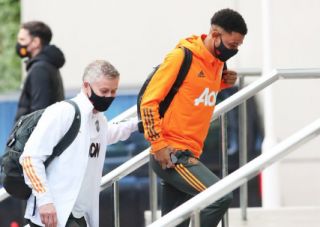 Is everyone ready for tonight’s FA Cup clash at Old Trafford against West Ham?

This is a competition we should be aiming to win this season and Ole Gunnar Solskjaer has some big calls to make when naming his starting line-up.

New signing Amad Diallo was spotted at The Lowry Hotel — United’s team hotel for home matches — so it looks like he will get his first call up to the first-team for a competitive game tonight. Perhaps a debut is deserved after scoring three goals and registering as many assists in just two outings for the U23s.

He is pictured below, courtesy of the Manchester Evening News, alongside the gaffer.

Former Man United manager David Moyes has got the Hammers in good form at the moment, and they will be aiming for an upset tonight in order to reach the next round of the FA Cup.

MEN claim there was no sign of David de Gea at the hotel and we expect Dean Henderson to start between the sticks. Interestingly, however, reserve keeper Nathan Bishop was there instead of Sergio Romero.

Eric Bailly, Paul Pogba and Phil Jones are all out injured.