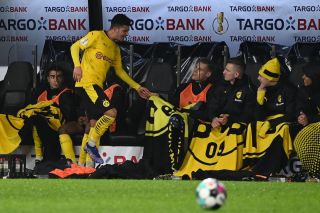 Bundesliga side Borussia Dortmund have reported losses up to €26m, which could have an impact on the future of right-winger Jadon Sancho.

The global pandemic is affecting football clubs throughout the world and BVB are no exception. It doesn’t help their fans that Dortmund have struggled both on and off the pitch.

According to Aktie (cited by ESPN), Dortmund generated a net profit for the second quarter but total losses in the first half of the fiscal year amount to over €26m and their turnover decreased by almost €60m to €177.4m — down from €236.6m the previous year.

We can’t help but bring comments from almost a year ago to your attention. From Borussia Dortmund CEO Hans-Joachim Watzke, quoted from Bild am Sonntag (via GOAL): “Even before the coronavirus outbreak, we said that we would prefer that Jadon stays with us. At the end of the day, however, you always have to respect what the player wants.

“I’ll state clearly, that no rich club should think that during this existential crisis they can steal players from us. We don’t have to sell anyone for less than they’re worth.”

Will Watzke speak with the same tone this summer?

After a summer of speculation when Sky Sports reported that the England international could join Manchester United for around £100m, a move failed to materialise. We believe that Sancho would have joined the Red Devils if the clubs were able to come to an agreement, though United were not willing to overspend on the attacker.

It could turn out that Sancho will be available at a reduced cost this summer. As things stand in the Bundesliga, Dortmund are sixth and run the risk of missing out on Champions League football. That is amazing when you consider the players they have: Erling Haaland, Marco Reus, Jude Bellingham, Axel Witsel — not to mention the man of the moment Sancho!

A transfer involving Sancho could be the perfect solution for all parties this summer.

One response to “Opinion: Can BVB’s financial concerns play into Manchester United’s hands?”